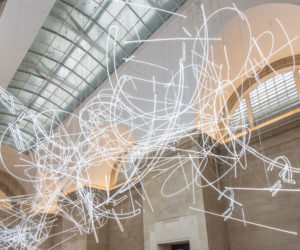 Give Cerith Wyn Evans two kilometres of neon tubing, and this is what he can do. While he strolled the spacious halls at the Tate Britain as a security guard in the 1980s, Cerith Wyn Evans must have dreamed of filling the neoclassical Duveen Galleries with his future work. What he couldn’t have known then is that, one day, his art would also animate Instagram […] 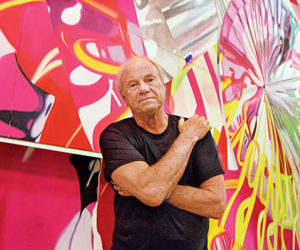 James Rosenquist, who helped define Pop Art in its 1960s evolution with his boldly scaled painted montages of commercial imagery, died on Friday April 28, 2017  in New York City. He was 83 years old. Rosenquist started out in New York City as a sign painter by trade and would work on abstract pieces at night — he translated the in-your-face style of giant advertising […]

Environmental art involves the creation or manipulation of a large or enclosed space, many effectively surrounding its audience.  Architectural (including landscape architectural) design might be said to qualify as environment art, although the term usually refers to artworks that do not function as either of these kinds of environmental design typically do.  Several artists, many associated with American Pop Art — like Edward Kienholz (American, […]

Have a favorite Artist?  A favorite piece of work?  Now, you can wear it forever!  If you are an art major, or an art collector, or just someone who generally appreciates and loves art, then these famous artist tattoos are perfect for you! 1. “Drowning Girl”- Roy Lichtenstein via Vulture 2. Frida Khalo via Vulture 3.”Moses” – Michelangelo via Inked Mag 4. Jackson Pollock via Pinterest […]